They Do Want Vaccines, You Racist Dirt-Bag 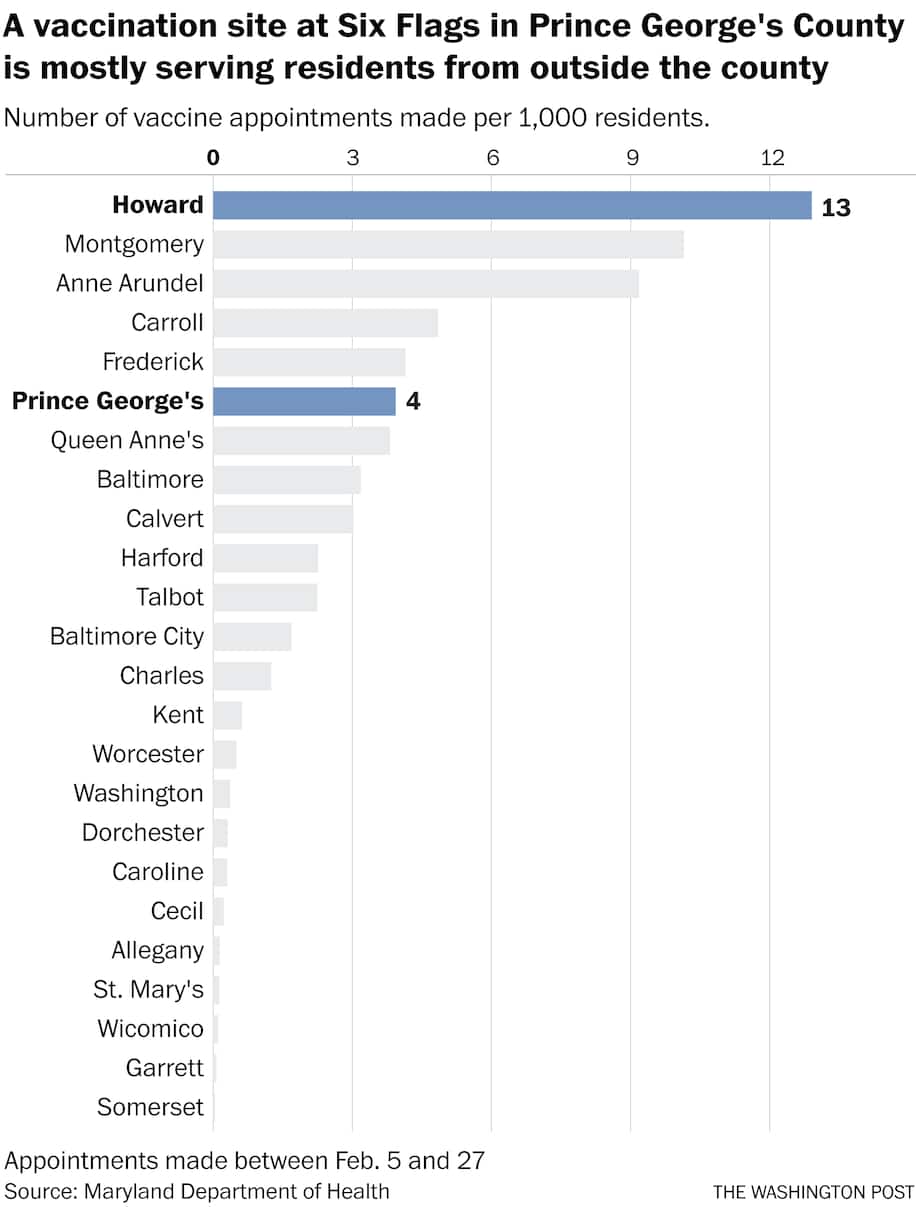 Sites in PG County mostly serve (White) folks from outside the County
So, now Maryland Governor Larry "Ratf%$#" Hogan is claiming that it's not his policies that are undervaccinating Black people, it's that Black folks don't want vaccines. While the never Trumpers see Hogan as the future of the party, it is clear that he as extensively relied on racist appeals to maintain his popularity, particularly by deliberately short-changing Baltimore City and Prince George's County, the which have the two largest minority communities in the state:

A 94-year-old veteran got so tired of waiting for an appointment that he drove around his Washington suburb at random, hunting for a vaccine.

A partially blind 81-year-old wanted a shot but had no computer or smartphone to register online. Yet another elderly Black resident of Maryland’s hardest-hit county, this one 102 years old, relied on church friends a few decades younger to help her through a distribution system best navigated by Gen Z.

Amid concern that prioritizing speed has heightened vaccine inequity statewide, Prince George’s County stands out: The majority-Black suburb has by far the most coronavirus cases in Maryland, and the lowest percentage of vaccinated residents.

Gov. Larry Hogan (R) has repeatedly cited vaccine hesitancy among minority groups as the key cause for the lagging rates, saying at one point that African American and Latino residents in Prince George’s, who represent 84 percent of the county’s population, are “refusing to take the vaccine.”

But local, state and federal leaders from across Maryland — all of them Democrats — blame the state’s decentralized sign-up system, which they say prioritizes those with more time, technology and information at their disposal over those who are disproportionately dying.

In interviews, more than a dozen vaccine-seeking Prince Georgians agreed.

Statewide, Black people represent 31 percent of Maryland’s population but only 16 percent of vaccine recipients for whom race has been reported. That disparity has grown wider over the past two months, according to a state analysis. Prince George’s lags far behind other counties, with just 8.3 percent of residents having received their first shot as of Thursday.

An equity task force Hogan created released plans on Thursday to target underserved communities with pop-up clinics and other efforts, and solicit ideas from community groups about how best to deliver vaccine doses. The governor acknowledged the state was “not where we need to be with the Black community or the Hispanic community.”

But Hogan also said he believes the state has done far more than others to acknowledge and address racial inequity in vaccine distribution.

“I’m not going to respond to every criticism of every person who does not like what we say or do,” he said.

Last week, the governor outraged Democratic lawmakers when he said Baltimore City was receiving more doses than it was “entitled to.”

He's got more class than Trump, who doesn't, but he's pandering to the same racist dirt-bags.