Headline of the Day

What a surprise, the PR department of the Sirius Cybernetics Corporation Amazon lies through its teeth.

They claim that their workers are well treated, and are free to take pee breaks, which is belied by the pictures of pee bottles in Amazon trucks and warehouses.

Amazon claims its workers don't pee in bottles; defenders say it's an urban legend. But these photos sent to me by a former driver for a former @amazon contractor called Synctruck in a California facility suggest strongly otherwise. https://t.co/hp4zCqOxRO pic.twitter.com/StHNvV9B1x

What's more, Amazon actually has posted notices telling workers to clean up their urine bottles at the end of a shift. (See attached Tweet)

They demand a schedule that allows no time to pee, and it is impossible to make schedule unless you pee in a bottle, because it's (at least) 15 minutes to find and use a bathroom and return to deliveries.

In a just world, Jeff Bezos would be sentenced to a life of working for ……… Jeff Bezos.

One of the responses to that tweet is telling: 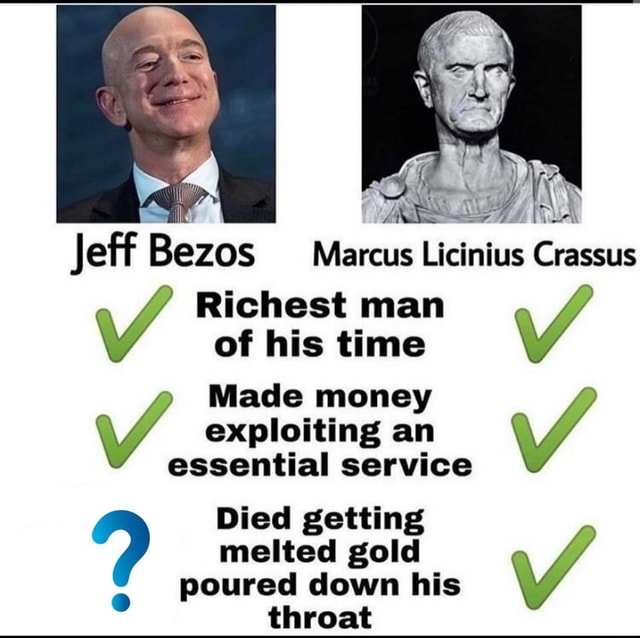 And yes, I know, that Crassus did not actually die in this manner, though he was almost as contemptible as Bezos:

The first ever Roman fire brigade was created by Crassus. Fires were almost a daily occurrence in Rome, and Crassus took advantage of the fact that Rome had no fire department, by creating his own brigade—500 men strong—which rushed to burning buildings at the first cry of alarm. Upon arriving at the scene, however, the firefighters did nothing while Crassus offered to buy the burning building from the distressed property owner, at a miserable price. If the owner agreed to sell the property, his men would put out the fire; if the owner refused, then they would simply let the structure burn to the ground. After buying many properties this way, he rebuilt them, and often leased the properties to their original owners or new tenants.

This is an attitude toward public service that I am sure Jeff Bezos would admire.

Posted by Matthew Saroff at 7:37 PM