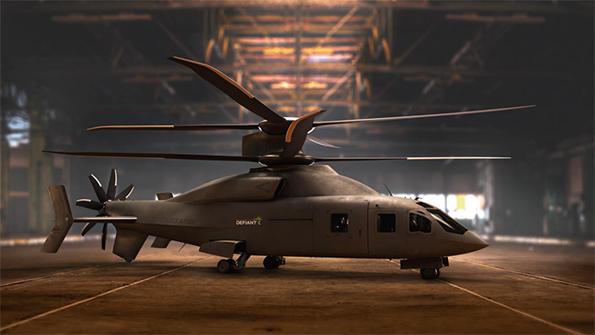 Much Smaller Footprint than a Tilt Rotor

After putting out a representative demonstrator, Sikorsky has revealed off of its Defiant-X helicopter for the Future Long-Range Assault Aircraft (FLRAA) program.

It does not achieve the same speeds as the tilt-rotor competitor V-280 Valor from Bell, 280 kt (520 km/h) from the Bell offering as versus and 250 kt (465 km/h) for the coaxial compound helicopter, but its footprint on the ground and on takeoff and landing, and its agility during takeoff and landing should be significantly greater than the V-280.

Also, the helicopter should be significantly more agile during takeoff, landing, and autorotation, because of lower disk loading.

One lingering uncertainty surrounding the U.S. Army’s Future Long-Range Assault Aircraft has centered on the service’s ultimate requirements for the advanced rotorcraft that will replace its Sikorsky UH-60 Black Hawk utility helicopters.

When the Army launched the precursor Joint Multi-Role Technology Demonstration (JMR TD) program in 2013, it provided industry with a “model performance specification”—placeholder requirements that would allow them to begin designing an aircraft.

The result was a pair of 30,000-lb. gross-weight-class demonstrators—the 280-kt. Bell V-280 Valor tiltrotor and 250-kt. Sikorsky-Boeing SB-1 Defiant, a coaxial rigid-rotor compound helicopter—both substantially larger and faster than the 22,000-lb. gross-weight UH-60M they are designed to replace.

Now, almost halfway through the CDRR phase, the answer to that lingering question about the Army’s requirements may be becoming clearer. The Sikorsky-Boeing team has taken the wraps off its Defiant X offering for FLRAA, and the design differs only in detail externally from the SB-1 now in flight test.

The Defiant X design has been optimized to meet Army requirements for survivability, maneuverability and agility in the objective area, or “at the X,” says Macklin, so that troops can be landed and offloaded quickly and safely during an air assault.

I favor the coaxial helicopter over the tilt rotor.

It seems simpler and safer.

Posted by Matthew Saroff at 8:56 PM