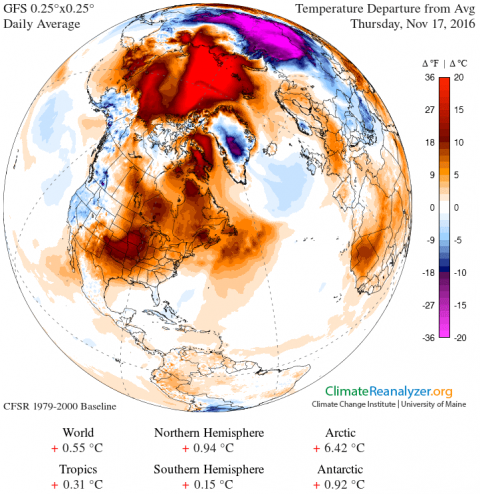 But in fall of 2016 — which has been a zany year for the region, with multiple records set for low levels of monthly sea ice — something is totally off. The Arctic is super-hot, even as a vast area of cold polar air has been displaced over Siberia.

Twitter’s expert Arctic watchers also are stunned. Zack Labe, a PhD student at the University of California at Irvine who studies the Arctic, tweeted out an image on Wednesday from the Danish Meteorological Institute showing Arctic temperatures about 20 degrees Celsius higher than normal above 80 degrees North Latitude.

Also, we now have indications that Antarctica's Southern Ocean may no longer be able to absorb excess CO2, which means that levels of greenhouse gasses make increase even more rapidly:

Already, initial data from an array of ocean floats suggest that upwelling waters could be limiting how much CO2 the Southern Ocean absorbs each year. This raises new questions about how effective these waters will be as a brake on global warming in decades to come.

“The Southern Ocean is doing us a big climate favour at the moment, but it’s not necessarily the case that it will continue doing so in the future,” says Michael Meredith, an oceanographer with the British Antarctic Survey in Cambridge, UK. Meredith is heading a series of expeditions over the next five years to help document the uptake of heat and carbon. “It really is the key place for studying these things.”

Hints of something similar have been seen before. In 2007, a team led by Corinne Le Quéré, now director of the Tyndall Centre for Climate Change Research in Norwich, UK, published a study in Science indicating that the rate of carbon uptake by the Southern Ocean decreased between 1981 and 2004. The authors blamed the changes on the winds that encircle the Antarctic continent. The speed of those winds had increased during that time, probably as a result of the hole in the stratospheric ozone layer over Antarctica and possibly because of global warming. Stronger winds are better able to pull up deep, ancient water, which releases CO2 when it reaches the surface. That would have caused a net weakening of the carbon sink.

This is real end or the world stuff, and in a few weeks, we will have a global warming denier in chief.

Posted by Matthew Saroff at 8:08 PM

Donnys advisors won't dispute the co2 absorption by the seas...They used that as an argument against man made global warming before. The 'missing 15 year' warming data? They will dispute the rate and whether it is enough to keep human beings alive...for while anyway.
I just hope the whole f#$@king eastern seaboard doesn't come running to kansas..(smile)
Cuz they don't know how to swim...