And the Dead Cat Continues Its Descent 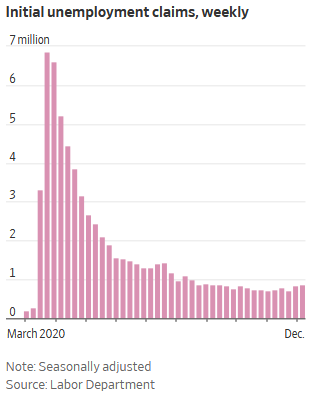 The increase in unemployment is not a blip any more.

The trend is definitely going in the wrong way:

The number of workers seeking unemployment benefits increased to a three-month high, another sign the economy is entering a winter slowdown as coronavirus cases rise and trigger new business restrictions.

Unemployment claims rose for the second straight week to 885,000 in the week ended Dec. 12, the Labor Department said Thursday. Last week marked the highest level for claims since September, when 893,000 workers applied for jobless benefits.

More broadly, claims are down sharply from a peak of nearly 7 million in March, but the four-week moving average, which smooths out weekly volatility, is increasing after trending downward since the spring. The weekly figures can be volatile around the holidays due to seasonal-adjustment issues.

Economic data broadly point to a slowdown. Retail sales dropped 1.1% in November from a month earlier, according to a Commerce Department report Wednesday. Overall consumer spending, which includes retail and services consumption, has continued to increase, but more slowly than over the summer.

Job growth cooled in November as many workers gave up looking for jobs. Robust job gains in the late spring and early summer largely reflected businesses adding back staff after lockdowns were lifted. But the recovery is far from complete, and many businesses continue to operate below capacity. Some state and local governments implemented new restrictions as coronavirus cases surged this fall.

While I expect any recovery to be faster than the debt-overhang of the great recession, it is not going to be fast, and it's coming from a much lower place.

This will not end well.

Posted by Matthew Saroff at 9:05 PM