And what's more, the response of the state department was to expel the investigator from Iraq:


Just weeks before Blackwater guards fatally shot 17 civilians at Baghdad’s Nisour Square in 2007, the State Department began investigating the security contractor’s operations in Iraq. But the inquiry was abandoned after Blackwater’s top manager there issued a threat: “that he could kill” the government’s chief investigator and “no one could or would do anything about it as we were in Iraq,” according to department reports.

American Embassy officials in Baghdad sided with Blackwater rather than the State Department investigators as a dispute over the probe escalated in August 2007, the previously undisclosed documents show. The officials told the investigators that they had disrupted the embassy’s relationship with the security contractor and ordered them to leave the country, according to the reports.

After returning to Washington, the chief investigator wrote a scathing report to State Department officials documenting misconduct by Blackwater employees and warning that lax oversight of the company, which had a contract worth more than $1 billion to protect American diplomats, had created “an environment full of liability and negligence.” 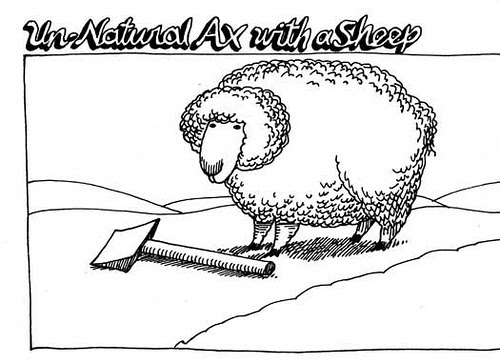 This raises the obvious question, just who at the State Department makes a habit of engaging in unnatural acts with sheep, and how did Blackwater get video of them doing this.*

Well, it's mentioned in passing in the above story that when State investigated this, the investigation was headed by Patrick Kennedy. (Not one of THE Kennedys)

At Foreign Policy, they go into detail on Mr. Kennedy's repeated roll in this, and similar clusterf%$#s:


Eye-opening new revelations about the private security firm formerly known as Blackwater Worldwide and its cozy relationship with the State Department are raising new questions about a senior Foggy Bottom bureaucrat who has found himself in Capitol Hill's crosshairs before -- and seems certain to now do so again.

On Sunday, the New York Times reported that Patrick Kennedy, the State Department's current under secretary for management, led a review of the private security firm in 2007 after its guards fatally shot 17 Iraqi civilians in Baghdad's Nisour Square. Kennedy's review, however, failed to reference a scathing State Department memo on the contractor completed just weeks earlier that found the company had systematically overcharged the government. The memo also alleged a senior Blackwater executive in Baghdad threatened to kill the State Department auditor behind the memo. At the time, Kennedy dismissed questions about early warnings of Blackwater misconduct.

Though the incident is now seven years old, anger remains on Capitol Hill about how the State Department, and in particular, Kennedy, manages relations with government contractors. On Monday, an aide for Senator Claire McCaskill (D-M.O.) noted his boss's "longstanding frustrations with the failure to improve contract management at the State Department." He cited an April letter between McCaskill and Kennedy in which she scolds Kennedy for failing to implement recommendations from the Inspector General about the maintenance of contract files dating back seven years.

No one on the panel interviewed Richter, according to the panel's final report, which includes a list of everyone consulted about the incident. It's particularly unusual that the panel didn't talk to Richter given that he specifically visited Iraq to review the State Department's contract with Blackwater, the firm at the center of the controversy. During a press Q&A on October 23, 2007, then-Time magazine reporter Brian Bennett noted the existence of "complaints about contractor conduct," and asked "why this review wasn't done earlier?" In response, Kennedy told reporters that his review found no communications from the embassy in Baghdad complaining about contractor conduct prior to the Nisour Square killings.

It should be noted that a cursory record of Kennedy's record (his Wiki, for what it's worth) it appears that Kennedy has had at least one similar incidents previously.

*To be fair, it could also be bribery that is responsible for this behavior, but my money is on a dead hooker in a hotel room in Bayonne, NJ.†
†Actually, it is also possible that this was a product of the cronyism that was rife at the instigation of Rumsfeld and Cheney.‡
‡Or, he could, as a lifelong member of the State Department, he could simply be inculcated in a tradition of CYA and obfuscation, particularly as regards the actions of politically connected ambassadors, but the sheep thing just makes better copy.