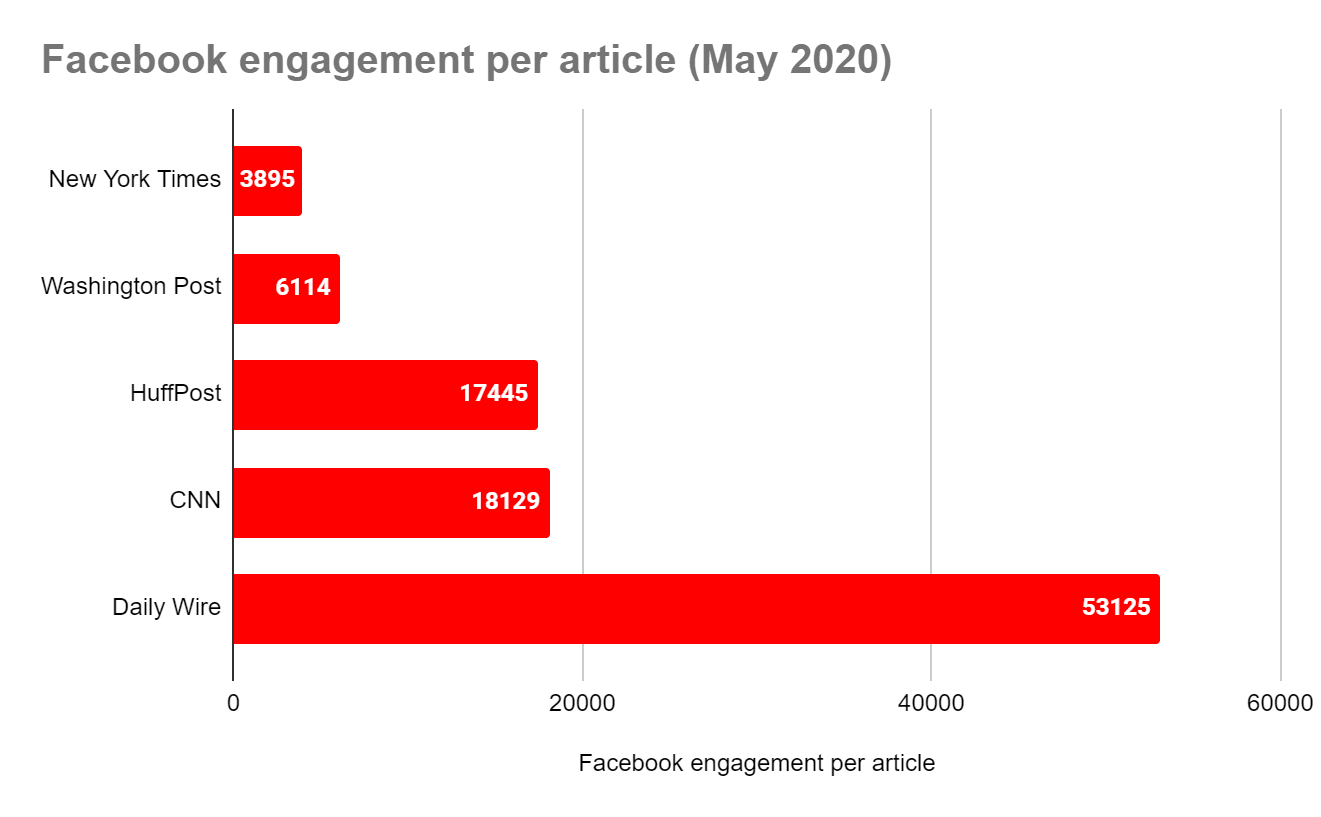 Clearly Fraudulent
I am referring, of course to Facebook.
It turns out that Zuckerberg's monster is complicit in Ben Shapiro's astroturfing to monetize false engagement.

You can be sure that if this were someone selling cheesecake, they would have been banned years ago.

From a more personal perspective, if I were to do this on my blog, I would be demonitized instantly.

In fact, if I were to make a post just SUGGESTING that you click through on the ads on my blog, I would subject to sanctions from Google™ Adsense™.  (Please see my disclaimer below)

I'm not sure if Zuckerberg is a wing-nut, or if he simply finds that it's more profitable to sell whack-doodle conspiracy theories to the wing-nuts, and I don't care.  The effect is the same:


The success of The Daily Wire, the website run by right-wing pundit Ben Shapiro, on Facebook is mind-boggling. The site has a small staff and primarily aggregates content from Twitter and other news outlets. Typically, its articles are very short, usually less than 500 words, and contain no original reporting.

And yet, last month, The Daily Wire was the seventh-ranked publisher on Facebook, according to the analytics service NewsWhip. Articles published in The Daily Wire attracted 60,616,745 engagements in May. Engagement is a combination of shares, likes, and comments, and is a way of quantifying distribution on Facebook. The reach of The Daily Wire's articles was equal to the New York Times (60,722,727) and more than the Washington Post (49,219,525).

But that actually understates how well The Daily Wire does on Facebook. While the New York Times published 15,587 articles in May, and the Washington Post published 8,048, The Daily Wire published just 1,141. On a per article basis, The Daily Wire receives more distribution than any other major publisher. And it's not close.

What explains The Daily Wire's phenomenal success on Facebook? Popular Information revealed part of the answer last October. But the full story is much darker.

The undisclosed relationship not only helps explain The Daily Wire's unlikely success on Facebook but also appears to violate Facebook's rules.

Why do these toxic Facebook pages keep sharing content from The Daily Wire? Do the Pepples just really like Ben Shapiro's site? The Daily Wire did not respond to a request for comment. But the behavior of these pages strongly suggests that The Daily Wire and Mad World News, LLC, the company owned by Corey and Christy Pepple, have a business relationship.

The pattern repeats over and over again, ten times or more every day. It's behavior that strongly suggests that Mad World News, LLC is being paid to promote content from The Daily Wire.
If that's the case, The Daily Wire could be violating Facebook's rules. Facebook allows pages to be paid to post content, but the sponsorship must be disclosed using Facebook's branded content tool.

The activity also appears to violate Facebook's prohibition on coordinated inauthentic behavior, which includes a ban on activity to "artificially boost the popularity of content."

There is no reason that the network of Facebook pages run by Corey and Christy Pepple should have flown beneath Facebook's radar. Years ago, the Pepples became notorious for exploiting Facebook with poisonous content.

The Daily Wire's apparent business relationship with Mad World News isn't the first time the site has been caught flouting Facebook's rules. Last October, Popular Information revealed a clandestine network of 14 large Facebook pages that purported to be independent but exclusively promote content from The Daily Wire in a coordinated fashion.

My standard disclaimer on any post about the aforementioned service applies:


Also, please note, this should be in no way construed as an inducement or a request for my reader(s) to click on any ad that they would not otherwise be inclined to investigate further. This would be a violation of the terms of service for Google™ Adsense™.

Posted by Matthew Saroff at 8:02 PM