The US gained back 4.8 million jobs in June.

BUT there's a big asterisk. Take a look at the chart below. The Labor Department's jobs survey were done in mid-June just before the big surge in covid-19 cases.https://t.co/48xohZeGGl h/t @andrewvandam pic.twitter.com/TvxxTF2yCT
— Heather Long (@byHeatherLong) July 2, 2020 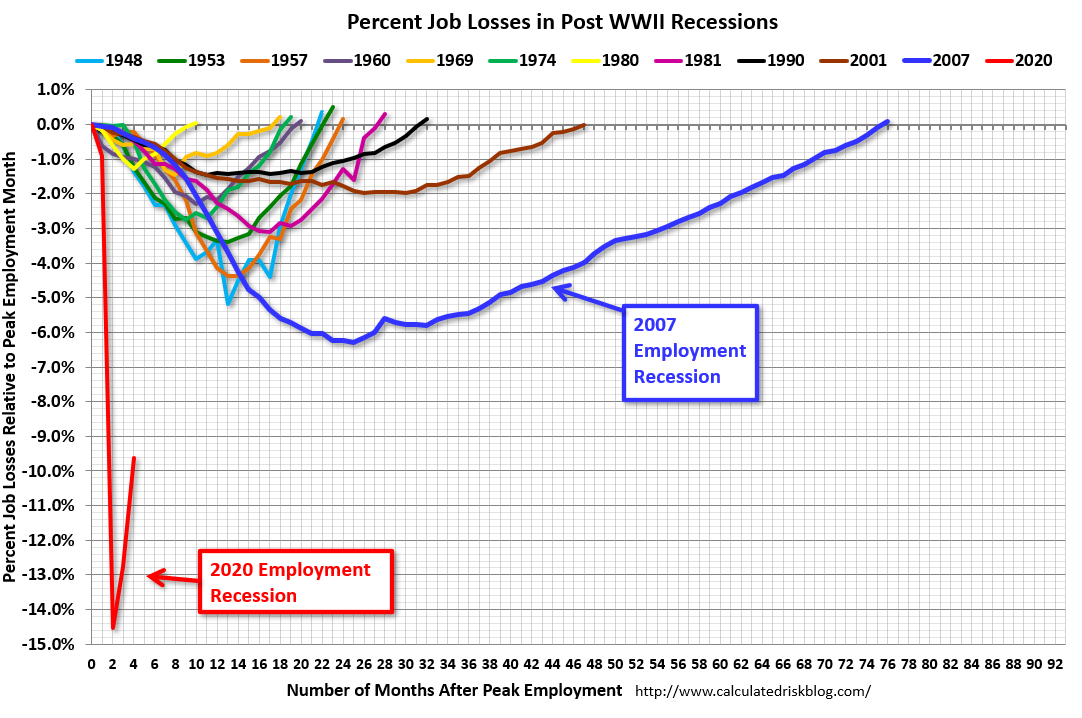 The Scariest Jobs Chart Ever
It's Thursday, which means that initial jobless claims for last week has has been released, and because the first Friday of July is a holiday, they also released the Kraken June unemployment rate.

Unemployment (U3) fell to 11.1%, though the more expansive (and IMHO more accurate) U6 measure remained above 18%.

Unemployment over 10% is catastrophic, and the weekly job losses of 1.4 million would have been considered apocalyptic in pre-2020 days, though they are a significant improvement over what has been going on since March.

It should also be noted that the week that was used for the unemployment sample, it's always the week containing the 12th almost surgically cuts off before the explosion of Covid-19 cases:


The U.S. economy added a record 4.8 million jobs in June, according to federal data released Thursday, but a surge in new infections and a spate of new closings threatens the nascent recovery.

Two key federal measurements showed the precarious place the economy finds itself in three and a half months into the pandemic as the country struggles to hire back the more than 20 million workers who lost their jobs in March and April.

While companies have continued to reopen, a large number of Americans are finding their jobs are no longer available. The unemployment rate in June was 11.1 percent, the Bureau of Labor Statistics said, down from a peak of 14.7 percent in April but still far above the 3.5 percent level notched in February.

And another 1.4 million Americans applied for unemployment insurance for the first time last week and more than 19 million people are still receiving unemployment benefits, stubbornly high levels that show how many people are struggling to find or keep work.

The Congressional Budget Office on Thursday said the coronavirus pandemic gave such a shock to the labor market that it would not fully recover for more than 10 years.

The economy is still in a dire condition, with the only good news being that the continuing cratering in hotel occupancy is likely to destroy Trump's highly leveraged hotel empire.

Posted by Matthew Saroff at 9:58 PM