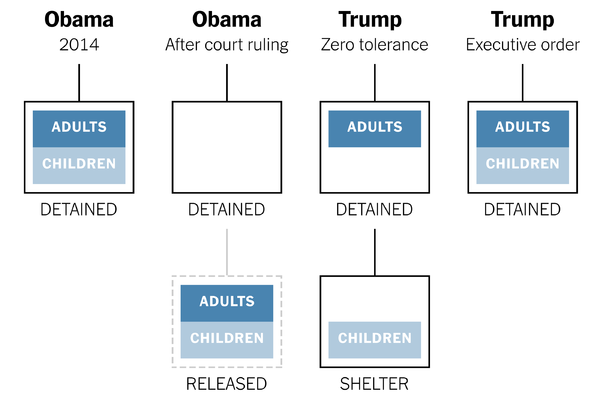 Returning to an Obama administration policy
Trump blinked, and issued an executive order changing the asylum policy to something marginally less heinous.

Ironically enough, it appears to be very similar to Obama's 2014 policy:


President Trump caved to enormous political pressure on Wednesday and signed an executive order meant to end the separation of families at the border by detaining parents and children together for an indefinite period.

“We’re going to have strong — very strong — borders, but we are going to keep the families together,” Mr. Trump said as he signed the order in the Oval Office. “I didn’t like the sight or the feeling of families being separated.”
But ending the practice of separating families still faces legal and practical obstacles. A federal judge could refuse to give the Trump administration the authority it wants to hold families in custody for more than 20 days, which is the current limit because of a 1997 court order.
………
The president’s four-page order says that officials will continue to criminally prosecute everyone who crosses the border illegally, but will seek to find or build facilities that can hold families — parents and children together — instead of separating them while their legal cases are considered by the courts.
………

Justice Department officials said the legal authority to end family separation relies on a request they will make in the coming days to Judge Dolly M. Gee of the Federal District Court in Los Angeles, the daughter of immigrants from China who was appointed by President Barack Obama. She oversees a 1997 consent decree, known as the Flores settlement, which prohibits immigration authorities from keeping children in detention, even if they are with their parents, for more than 20 days.

The 1997 case imposes legal constraints on the proper treatment of children in government custody, which stopped Mr. Obama after his administration began detaining families together during a similar flood of illegal immigration several years ago.

“It’s on Judge Gee,” said Gene Hamilton, the counselor to Attorney General Jeff Sessions. “Are we going to be able to detain alien families together or are we not?”

As for those of you who are wondering why I'm bringing up the contemptible policies of the Obama administration, it is because Trump's even more despicable policies did not spring fully grown out of his head:  They were a logical progression of Obama's eager embrace of his role as, "Deporter-in-Chief."

The past is prologue, here, and it is not by accident.

Fundamentally, the issue of illegal immigration is driven to a large demand for low cost labor, and if we were to aggressively target employers, and increase the perceived risk and perceived cost to potential employers, our immigration enforcement system would be both more humane and more effective.

Posted by Matthew Saroff at 8:55 PM